March Through Time Drums Up Recruits

This would be our third year participating in the Ohio History Center's "March Through Time" event in Columbus, Ohio. I had been approached by their program coordinator, Andrew Hall (himself a gamer), to add demonstrations of historical miniatures games to the day's slate of events in the museum and reenactors from all periods of History in the adjoining Ohio Village. We'd had good success in our previous two years, drumming up interest from the attending public. I had even higher hopes for this year, as Andrew had moved us from the "red carpet area" in the museum center to Gallery 3 -- strategically located right by the door attendees have to exit through to visit the reenactors in the village.
By my estimate, we had at least 50% more people (and maybe twice as many) stop by and express interest or even sit down and play a game than in our previous years. It was really cool to see history teachers come in, eyes wide, and say, "Wow! I didn't know you could do all this!" And every bit as heart-warming was watching kids roll dice, move troops, and obviously be engrossed in their first taste of tabletop historical miniatures gaming. Even moms and daughters sat down to play and check out what all of this was about.
Nine game masters from Great Lakes had stepped forward to run games. All of them did a magnificent job enticing the public to sit down and try it out. We had quite a few members who not only showed up to play in games, they also acted as ambassadors to explain the hobby to folks who walked up to their tables. This was the perfect chance for HMGS Great Lakes to fulfill its mission, and promote historical miniatures gaming to the public at large.
Running conventions and game days is always a good thing -- it keeps our membership strong and our hobby going. However, recruiting new blood into the hobby (and chapter) is something we should seek out more often. Doug Johnson and the Colby Street Irregulars have this down to a science in the Toledo area. Just about anytime Fort Meigs has a historical event, the stalwart Colbys can be found running a game and talking to people about our hobby. It was great to follow in their footsteps at the Ohio History Center here in Columbus!
I can't thank my GMs enough for devoting their time and effort to become salesmen for historical miniatures. I also want to thank the members who came down to play. I WANT you guys to come and sit down and get in some gaming. Seeing the games in action makes the public feel more comfortable. If no one was sitting at any tables, and all the GMs were eyeing people like sharks, they'd likely feel nervous and get the heck out of there! So, thank you, thank you, Great Lakes members, for coming out to game last Saturday!
I am going to thank each of my GMs by posting pictures of them working their magic this past Saturday. I have said it several times on Facebook already, but I want to give a special thanks to Jeff Russ -- who was our Chief Wrangler. I put him in a strategic position at the entrance to Gallery 3, and he made it a point to greet everyone who walked past and give them a quick spiel on what was going on. It takes a certain personality to keep a positive frame of mind and be an upbeat salesmen when folks don't always follow your suggestions and walk inside to check things out. His smile never faded, and his energy never lagged. He also had talked to a toy soldier manufacturer ahead of time and handed out free 54mm toy soldiers to young players (and copies of the simple rules he was using).
Another who did amazing jobs was Rob Rhodes, who set up the American Civil War Battle of Franklin outside the entrance to our gallery, in a prime spot. His museum-quality diorama enticed people strolling by to ask questions and step up and admire the miniatures and scenery. Rob was a great spokesmen for our gamer passion for History, and for the hobby, as well.  Others who did bang-up jobs being ambassadors were Anthony Burger and Don Goddard. I hate to leave anyone out -- you all were so helpful that day.
The Ohio History Center loves our participation in their event and has even asked us to participate in a new, American Civil War only, event. Anyone interested in taking part and running demo games at this event, please let me know by email. I will add the date once I know of it. As a chapter, we also have this prime space to use for Game Days at no charge, if we are interested. There are plenty of places to hold games either in the museum area for exposure, or tucked away in the plaza level or in classrooms. I can liaison with the museum, if you're interested in holding a tournament or game day here.
All in all, I feel our chapter planted seeds on Saturday, hopefully causing an interest in History and wargaming to grow. 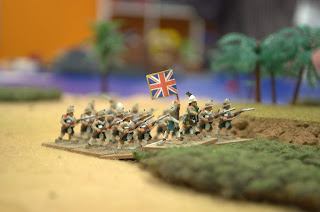 March Through Time Drums Up Recruits 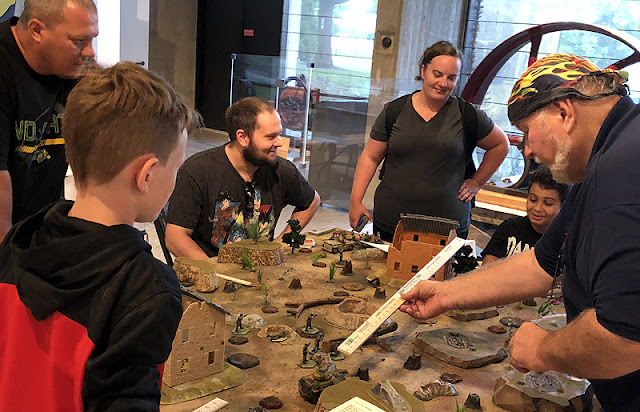